Data is collected by students in grades K-12, sampled from trees in their study area.


This program is funded by the New Hampshire Space Grant Consortium, located at the University of New Hampshire's Institute for the Study of Earth, Oceans, and Space.

Published in EOS Spheres, Fall 2008
Seeing the Forest for the Trees

THE SEEDS OF FOREST WATCH were sown back in the late 1980s when Barry Rock would travel to secondary schools, show some clips from the Public Broadcasting Service’s “Mission to Planet Earth” series in which he was featured, and get standing ovations and requests for autographs from the kids.

“It was silly stuff, really,” Rock recalls. Silly perhaps, but it sure got the students fired up and laid the foundation for what would become a central part of Rock’s scientific research—engaged outreach.

Forest Watch has been going strong now for 17 years. The program is a unique way of conducting science with the help of primary and secondary school students who collect and process data relating to air pollution damage in forest stands in New England. Over 350 schools have participated in the program, with some 50 to 100 actively engaged in monitoring white pines, a bio-indicator species for ground-level ozone (smog), in any given year. 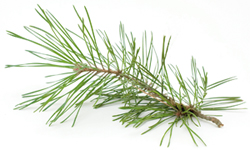 Over the course of 17 years, Forest Watch has demonstrated that students can collect valuable data for ongoing scientific research and learn science and mathematics by doing research in their local area. Student data have clearly shown how responsive white pines are to year-to-year variations in ground-level ozone exposure.

“The access to student data, when properly collected, has been invaluable in terms of doing our science. The good news is that as the result of student data, we’ve learned that trees across New England have become healthier during the late 1990s and on into the 2000s compared to the early 1990s,” says Rock.

The National Science Foundation has funded Forest Watch as part of its Science, Technology, Engineering, and Mathematics Program, which seeks to increase student interest in the sciences. 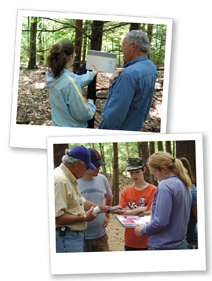 Rock notes that one measure of the program’s success is the fact that as he walks across the UNH campus he is often greeted by students who are complete strangers but know him through video tapes they saw in the their Forest Watch programs in middle or high school.

Key also to the program’s success has been the funding support provided by NASA’s Space Grant program. Rock credits David Bartlett, director of the New Hampshire Space Grant Consortium, with “stepping up” and providing additional funds to bolster Forest Watch. “Space Grant has been very instrumental and has made significant contributions almost since the beginning,” he says.

“Forest Watch was the very first outreach program that NH Space Grant funded, starting in 1991,” says Bartlett. “It’s gratifying that we have been able to support this program continuously ever since."

In 2008, the IEEE International Geoscience & Remote Sensing Symposium (IGARSS) was held in Boston. The theme, “The Next Generation” and defined the event’s overarching focus on outreach and budding scientists. The participation of four seventh-grade students from the K-8 Gilmanton School in Gilmanton, N.H. was clear evidence of how successful programs like Forest Watch are at engaging young people in real science and providing them with unparalleled opportunities.

The four girls from Gilmanton presented research findings from their Forest Watch remote sensing work to Earth scientists from over 50 countries during a poster session. The experience, noted their teacher Mary Fougere, opened their minds and doors to the future in ways that no other experience could. The girls may have the opportunity to travel to South Africa in 2009 for the next annual IGARSS symposium.

by David Sims, Science Writer, Institute for the Study of Earth, Oceans, and Space.
Published in Fall 2008 issue of EOS Spheres.